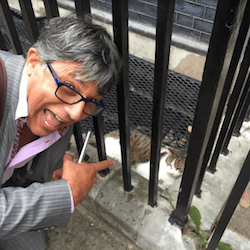 It seems that Ethos is in demand.

Second visit in two weeks to 10 Downing Street.  A central government department wanting weekly updates on a project to re-imagine how the elderly engage with them. A metropolitan city council wanting us to help them solve their youth engagement problems. A Local Enterprise Partnership asking how we can help them change the weather for innovation.  A county police force wanting help with their culture change program.

Call it what you will, we call it ‘Work-Live-Well’, more and more organisations are realising that the status quo is crumbling fast. The nice comfortable rules of the top down hierarchy that has existed since the 1780s are cracking before our eyes.  Today’s employees are often disengaged from the organisations they work for.  Today’s organisations operate through process more than real dialogue.

Let’s look at it in just 5 bullet points;

The core of this new emerging paradigm is that the way that value is exchanged between  an organisation and individuals has to turn 180° so that the individual has control of their own work, life and well-being. Individuals will decide what they want to do, when they want to do it and what they want in return. Employment contracts will need to be replaced by a more equal value exchange.  HR departments  will need to represent the individual’s perspective to the organisation as their primary responsibility. Hierarchies will need to dissolve and support  more inclusive and collaborative working models. Customers will want to define the way that they interact with and use the services that they chose.  Beneficiaries will ask for the help they need rather than  taking the help that is offered.

So, in this topsy-turvy world, how do individuals and organisations put agreements in place?  If I can decide what I want to do, when I want to do it and where I want to do it, how does the organisation do any planning at all? You would be forgiven for thinking that this will all result in mayhem.

But it need not. To get a glimpse of the world in the future that is approaching us faster than you think,  I’d like you to do one thing for me.  It’s not going to be easy. Delete your perception  of how an organisation and individuals interact today.  I know that’s tough, but go with me here.

Let’s put the individuals at the centre of an organisation. Imagine asking each of those individuals what they would like (love) to do and what they would like to get back for doing it. By giving them permission to make their own decisions on their contribution at work and by allowing them to do so in a safe place you will, you will be asking each of them to open up their lives and their hearts. This process will allow them to create their side of a Value Exchange.

Everyone within the organisation  needs to exchange value with other Individuals. Value exchanges can be matched  like pieces of a jigsaw  and, although more complicated than  the simple CV/job description matching that goes on now, it will result in individuals who are passionate about what they do after being engaged with others with whom they are exchanging value.

There is a growing tendency for individuals to work gigs rather than doing one thing five days a week.  This is a logical development of a networked society where location become less important and information is freely available to all. A value exchange will allow individuals to understand exactly who they are exchanging value with, when why and where. And,  because those people love what they do, they will trust each other.

This may all sound like an impossible dream but bear in mind that technology is the great enabler of our dreams. The basic specifications of a Value Exchange are being developed and will be put in the Commons so that they can be enhanced by the global community to the benefit of all.  Like what happened to Linux. New technologies like Blockchain will allow value exchanges to be recorded, managed and interacted with in an immutable way.   Industry leaders like Tim Berners-Lee are working hard on finding ways that people’s privacy on the Internet is restored.  Have faith and know that this future will arrive.

Around the world, lots of people – including myself – are seeing this as the future of work. Organisations are acknowledging  that their old hierarchies and broadcast processes are resulting in a continuous lowering of engagement with their employees and their customers. Service providers are realising that their old methods of “inside out” service definition is resulting in the disenfranchisement of their customers and beneficiaries.

Governments are getting it too.   Which is why I found myself  outside the black door of number 10 Downing Street at 3 o’clock on the hottest September Tuesday afternoon in the last million years.  We were walked up the spiral staircase and past the pictures of our past Prime Ministers (noticing that David Cameron was missing…) and into the ‘White Room’.  So called because the walls and ceiling have been painted cream.  Go figure.

We peered at the (in)famous Rose Garden which, in real life, is about the size of a postage stamp. We scampered to another window to see if the Chancellor was having a Pimms in the back garden. He wasn’t.  We walked into another room and saw the desk on which Hitler wrote a letter to Mussolini. No idea why it’s at Number 10..

When the meeting started, we had a chance to talk about and discuss what we love. For me, it was to discuss the importance of creating a different climate for innovation with one of Theresa May’s Special Advisors –  Will Tanner.  I attempted to convince him that, by embracing the future of work and the concepts of a value exchange, the current BREXIT turmoil has given us the opportunity to re-define the future as it did back in the 1780s.

The conversation was energetic. I have no idea if my meeting there will change anything.  But I grasped the opportunity to do what I love.

We all should. And we can.

As I exited through that famous door, I saw my hero. He was sunning himself inside a railing just by the door. He also was doing what he loves.  He does it so well that he’s now an international rock star in the cat world.  Without even trying.

Getting a selfie with Larry on a sunny Tuesday afternoon was an unexpected highlight in my life story.