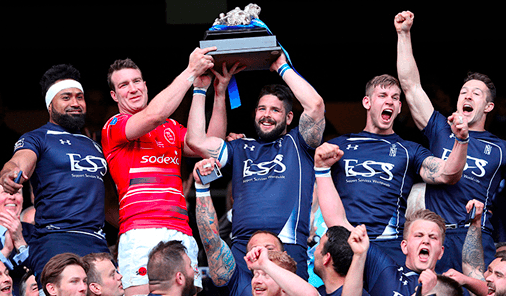 Football has captured the public’s imagination in recent weeks with the Leicester City triumph against the odds; what a spectacle! However, few in the forces could not help but be equally inspired and gripped by the sense of occasion at the annual clash between the Army and Navy at Twickenham. The capacity crowd of 82000 gathered to meet up with friends, fill the stadium to cheer on their favoured team and of course drink Twickenham dry! No doubt even the RAF fans were covertly swelling the numbers hoping again for an upset and a repeat of their epic victory in 2015!

A beautiful Spring day was enough to lift the spirits and fill the air with anticipation as the masses poured off trains, squeezed past ticket touts, burger stalls and memorabilia on their way to the hallowed ground and home of England rugby. So too were some 400 Team Army sponsors and guests heading for Rugby House and what was to be a memorable day. With many spouses along with some excited youngsters all joined in the fun to witness the occasion and add to the carnival atmosphere.

This popular event in the calendar has become an ever-increasingly important part of the portfolio offered to our sponsors who help us raise much needed funds for the Team Army Sports Foundation. We are now approaching the £4m mark since starting over 5 years ago! Twickenham did us proud with excellent food & hospitality which helped to ‘oil the wheels’ and it was all too soon time to climb the many flights of stairs and venture out into the bright sunshine for the match. A first rate demonstration of rugby then thrilled the crowd with the Army taking a commanding lead by half-time. It seemed it was all done and dusted with the Babcock Trophy heading back to Aldershot. However, perhaps it was the rather pathetic attempts to sustain a crowd-driven mexican wave, or the Army in the sin-bin, but the Navy appeared to snap into ‘plan B’ and suddenly they raised their work rate to attack the 19 point deficit, and attack they did!

It created an excellent climax to the game as the minutes ticked away and finally brought the match to an edge-of-the-seat finish as both teams finished level at 29 apiece. With that result it meant that the Royal Navy were able to accrue sufficient points to take overall victory in this classic inter-services fixture and the Babcock Trophy now heads to Portsmouth. The arm-chair analysis took place back in the hospitality suite over tea, cakes and pies. Finally, the day drew to a close and the masses dispersed, gently glowing from the day’s events.

A really big thank you to our many sponsors that helpfully supported the event and to the extended team that made the day happen. It was a memorable day all round. A wonderful result for forces rugby with the Army, RAF and Navy now winning in three successive years it surely must be a date for the diary in 2017 – note it now; 29th Apr 2017; how could you possibly miss it!

In summary the Army won the Women’s and the Veteran’s Inter Services but the Senior XV title returns to the care of the Royal Navy.