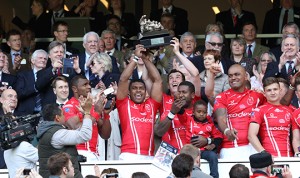 Described euphemistically as ‘LinkedIn with beer’, this year’s Team Army VIP hospitality event at the annual Army vs Navy Rugby on May 9th at Twickenham broke the record by hosting over 300 sponsors, hosts, friends and family.  Fine wining and dining provided the perfect forerunner to the clash between the two Services and the 98th Army v Navy game.

The match itself provided all the expected excitement. A nail biting first half, with both sides on good form, eventually saw the Army pull ahead with excellent tries from Lt William Jones R WELSH and precision kicking from LBdr Owain Davies RA. After half-time it was the England International LCpl Semesa ‘Rocco’ Rokoduguni RSDG, breaking from 40m which widened the gap and sealed victory with some solid kicking by Pte Jonasa Bulumukau SCOTS.

A huge thank you to all those who came along to spend their Saturday with us. We are truly grateful for your support which has a huge impact on sport in the Forces.  We have been inundated with warm thank yous but the best comment of the day came from 9 year old Daniel Clark who said, ‘Dad, that was the best day of my life’!

For more details and photos visit the Team Army website

Photo – the Army team receive their trophy after the 36-18 Army Navy win at Twickenham, image courtesy of Army Navy Match