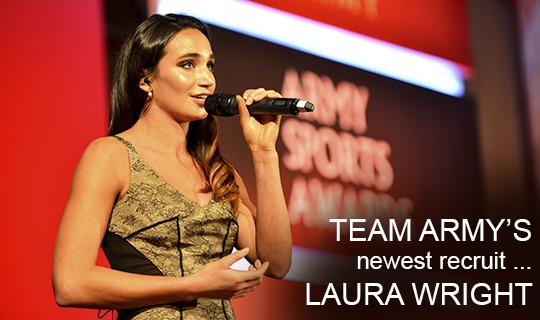 Laura Wright, one of the biggest selling classical artists of the decade, has become an ambassador for the Team Army Sports Foundation, the Ethos charity that raises funds for Forces sport.

Laura has over a million album sales and has toured with Russell Watson and Alfie Boe. However, as a youngster she trained to county level in hockey, netball, tennis and javelin and still takes part in boxing, crossfit, pilates, plays rugby for Rosslyn Park and raises money for charity in running and cycling events.

‘I grew up being very passionate about sports,’ says Laura, ‘so it’s wonderful for me as a musician to help Team Army with their mission to raise funds for Forces sports. I want to help the best get better!’

Sport within the Army is taken very seriously, not only for the physical benefits but also because sport’s values and standards mirror those held so highly in the Armed Forces: teamwork, striving to be the best, discipline in the face of challenge and learning from and overcoming defeat. Yet taking part in sport is often expensive and in some cases, beyond the means of services personnel. Team Army helps to make sport more accessible by raising and distributing funds to reduce the cost of participation, as well as increasing the opportunity for injured troops to take part in competitive sport.

Last year, Laura opened the prestigious 2015 Army Sports Awards ceremony held at the Guildhall, London by performing ‘Invincible’, her song from the hugely successful Invictus Games. In her role as ambassador, Laura will support military sporting events throughout 2016, helping to raise the profile of Team Army and ultimately help many more soldiers to take part in sport.