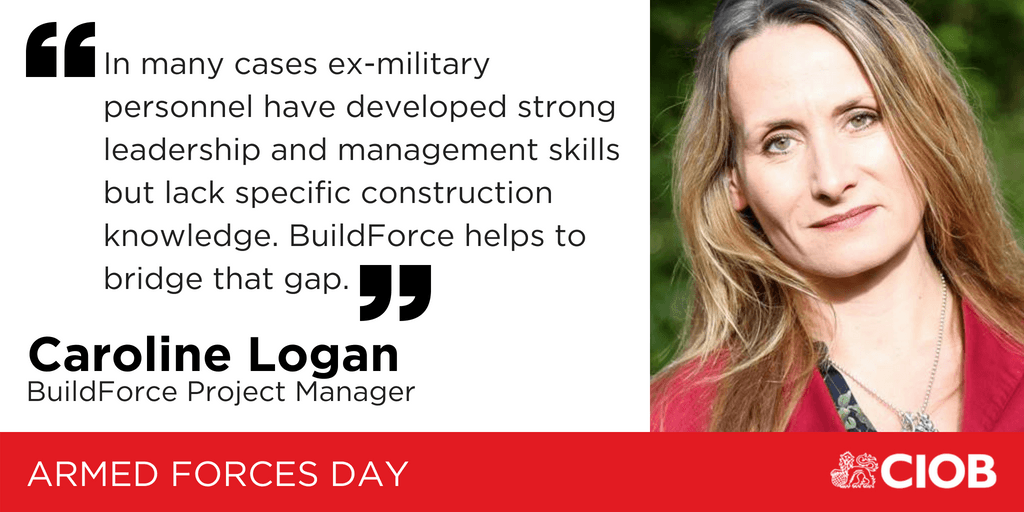 Ahead of Armed Forces Day tomorrow, our BuildForce Project Manager, discusses how we are helping ex-military personnel find a future in the construction industry. First published in the CIOB website.

BuildForce is an Alliance of construction employers, industry bodies and charities, supported by the government, which connects Service Leavers with opportunities in construction, whilst giving employers access to a unique pool of talent.

Since our launch in January last year, BuildForce has:

The Chartered Institute of Building, one of the many organisations supporting our work, quotes figures of 230,000 new recruits needed in construction by 2020. The CIOB also reports that skills shortages are not confined to the trades; demand for managerial staff is growing. Many of the 14,000 personnel leaving the forces each year have exactly the kind of skills that are transferable to the construction industry.

Angela Forbes, BuildForce’s new Chair and Commercial Director at Lendlease, said: “BuildForce has grown into something quite remarkable. The success in placing Service Leavers into the construction industry shows the parallels between the two”.

Here we have two stories of people who held very different roles in their Armed Forces days and have put their skills to use in the construction industry.

From Royal Engineer to Civil Engineer

Tom Baron left the Army last year after 11 years serving with the Royal Engineers. During this time, he led large teams in a range of highly challenging environments across the globe. More recently, he delivered courses on, among other things, infantry skills, combat engineering and command-leadership-management courses.

Tom attended a BuildForce ex-forces networking event. We found him a placement with house builders KeepMoat, working alongside a site manager with 15 years of experience. This role, along with the range of problem solving skills gained in the Army, provided Tom with the stepping stone to his current role as site agent for the infrastructure group, and BuildForce Alliance partner, Balfour Beatty. In practice, he manages a site, holding overall responsibility for health & safety, ensuring all contracts are delivered by Balfour Beatty, subcontractors and suppliers, managing issues and risk and escalating them where necessary.

“Spend time researching which area of the industry fits your skill set and interests you. Then get some quality work experience. Lots of Service Leavers, myself included, become fixated on qualifications, but most large organisations will provide free training when you’re employed. It’s about demonstrating how what you’ve done in the military can work in their environment. Having lots of work experience proves that.”

From Electronics Technician to Site Engineer

Abel Makore spent six years in the Army, serving in Germany, Northern Ireland and Iraq. After a year of casual jobs, he accepted a place to study civil engineering at Stafford University. However, after graduating he was disappointed to find a lack of opportunities and had almost given up on finding a new career when, in 2017, he came across information about BuildForce online. After registering, he was invited to attend a BuildForce-organised Insight Day in Chester, where he got to meet a range of potential employers and got advice on how to present himself on his CV.

Following the event, Abel was offered several placements, but did not need to take them up as he was offered a permanent role at EDF Energy’s Hinkley Point C nuclear power station, the first of our registrants to be placed there. He started in January.

“I wish BuildForce had been there when I first left the Army. My new boss said I got the job mainly because of my experience in the forces – being part of a team and having a good work ethic – the engineering experience will come with time”.

In many cases ex-military personnel have developed strong leadership and management skills but lack specific construction knowledge. BuildForce helps to bridge that gap, providing access to training, mentoring and working with organisations such as the CIOB to help them gain built-environment qualifications before they leave the services.

Our aim is for BuildForce to become the ‘go-to’ organisation for enabling ex-military personnel to get into construction whilst also helping smooth the transition into civilian life. If you’d like to find out more and would be interested in signing up – either as a Service Leaver or as an employer – visit our website: https://buildforce.org.uk/

BuildForce is funded by the Construction Industry Training Board and aims to help reduce construction skills gaps by helping ex-military personnel – through mentoring, work placements and training – into worthwhile careers. The initiative is sponsored by its founding partners: EY, Lendlease, Morgan Sindall and Wilson James, with support from delivery partner Ethos and its 80 Alliance partners.