I think I’ve been sucked into something positive & immensely satisfying. 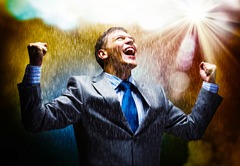 In the middle of 2013 I met a wonderful lady as I was wandering around attending networking meetings in London. Usha Chadha was a soul who seemed to have been looking for her place in the world but had found it. I asked her why she was so contented and she told me the secret was working with an organisation that she loved.
Having heard that before from others who really didn’t mean it, I parked it. In January 2014, after a specially hard and emotional breakdown of communications with my business partner, I was looking for another way of working and remembered Usha’s smile.  She quickly introduced me to the CEO of an organisation called Ethos VO, Robert Pye,  and it was not long till I was sitting with him at his home having a cup of tea and looking out of his windows over the rolling Surrey countryside.
Rob sparked something in me. He was passionate about what he was doing.  I mean PASSIONATE.  Not the ‘I-have-to-have-passion-about-what-I-do-because-I’m-paid-a-lot–of-money-to-have-it’ type of passion that my previous CEOs have had.  He had a real passion to change the world for the better and he was brimming over with excitement