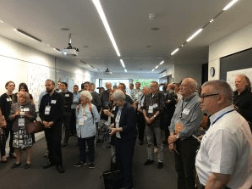 On Wednesday I attended an all day workshop/game at the Centre for Ageing Better. The event was the brainchild of Paddy Hanrahan and Tris Lumley. The idea? To create a £2m fund and ecosystem to pilot bringing together key stakeholders in this area in order to provide digital interventions that could really improve the lives of the elderly.

The full report for the day can be found at http://www.joinedup.digital/#!latest/cvvr9

In prep for the session, Tris and I excitedly exchanged perspectives about Ethos’ experience of adopting exactly this approach with our various Ethos projects over the past 6 years with some success. It was therefore with a high degree of enthusiasm that I reported for business (slightly late courtesy of yet another Southern strike!) at just after 10.00am.

The first thing the game team told me was that they would like me to play DWP – aware of some of our co-venturing activities and my knowledge of some of their issues. OK fun. Game on!

We then had pretty much the first hour taken up with a briefing of what was expected of us. Last year the centre for ageing better had commissioned Mori to produce several archetypes representing cohorts of elderly with issues/problems and the ultimate objective of our game was to develop solutions via produce agreements involving actors right the way through the value chain until ultimately these solutions might be “adopted” by their ultimate beneficiaries (actors playing the Mori Archetypes).

In order to achieve this we saw a huge stakeholder graph that had been drawn from our Slack.com participation and the email trails leading to the event and similarly a local graph of the fictitious town called “Slipham” where our elderly came from. The room was then spread between large national orgs such as Age UK / DWP through to regional players and local organisations together with a handful of “advocates/activists” who were pushing local actions (this included Anna Dixon the Centres CEO who played her role with relish!).

So what happened next? We started to play the game and I had an interesting insight. If I had the means of the DWP, the knowledge of (some of ) their strategic priorities, and close access to the problem groups, what would I do? A huge sense of liberation and excitement flowed through me for the rest of day. It was joyous. Very different from the “I can’t believe how hard this nonsense is”. The type of feeling you get when you are actually employed or even consult to those senior positions within very large organisations.

I concluded that we really must have more games like this where we solve real problems by “wearing” each others organisations.  Hugely useful. So. I’m DWP. There are problems in the room. What do I do? Head straight for the problems! Of course. Spend time understanding their problems before innovating and connecting. I interviewed of few of the “problem scenarios”. Then third interview and I found Trevor! Trevor used to be an FE lecturer then got sick. It took him an age to convince locum doctors of his inability to work but finally he was signed off long term sick and has been having a fairly rough ride. In fact he has become more and more socially isolated. What he wants to do is to reverse this and ultimately get back to work doing what he loves most. Training and education.

Now this really scratched one of my DWP itches. I know that we lost lots of trust with those most needy during the implementation of the various outsourcing programmes around disability benefits using ATOS and major outsourcers to run the service. Extensive telephone interviews and locum GP face to face interviews were implemented to ensure entitlement to those disability benefits under the welfare to work scheme. But now with the early stages of “Universal Credit” we want these (currently 3m people) to come back to us to talk about a future of work under THEIR terms not ours. For example, this could be part time work. It could accommodate those moments where I can’t get out of bed because of depression. No matter. It won’t destroy your benefits. But we have lost trust. Disability claimants want to know “why?” they should come back to a system that has not served them well.
I think there is a way to do it without having to feel a “direct” DWP intervention.
Back to Trevor. I discovered early on in the game that Trevor has already decided to take some baby steps. He’s getting involved with a local computer club. This will help him socially. It will allow him to update his IT skills and hopefully lead him on to other things. Trevor and I discussed his interest in getting back into employment and I mentioned our National Account Programme looking at the top 250 employers in the country and the shift in FE funding from SFA/Colleges to an employer levy (0.5% on payroll costs) from next April. This was unleashing huge opportunities in new forms of employer led training and a wholesale look at the FE sector. Would he be interested if we could introduce him to employers in the education space? Of course he was!
What if I could go away and develop a programme that would cater for Trevor’s very specific needs that would also serve many people like Trevor all with different needs, hopes, desires. Would he commit to adopt such a solution? YES! So actually DWP formed an initial “contract” or value exchange with each other. At Ethos we call this a VED (Value Exchange Document). A national organisation having an outline proposition exchange with an individual?  How bizarre? But how completely radical and innovative. Empowering. Exciting? Petrifying?

So DWP and Trevor had an (poorly formed) contract and a room full of stakeholders who would potentially add value to possible solutions. What was missing?

It was at about this point that it occurred to me that I was doing my day job. Only with everyone I needed in the room. All in a day not 6 months. “Ethos on Acid”

So there were major gaps. No health and wellbeing components. I went and talked to the NHS. The entered into a contract with the proposition to support it.

Interfaces with the local community were missing.  I talked to people from various Slipham community groups including advocacy and they agreed to help me (or rather engage in a contract “VED” with the proposition.)

But what about education specifically. I bumped into Loughborough University and the “University of the third Age” Bingo.

exchange with people via “solutions”.  The board on the left hand side was filled with pre-existing tech solutions (solutions looking for problems!*!*) and a number of blank “value propositions”. That’s what I snatched first with Trevor – we went to the board together and made our contract there and then. Both stuck our tokens to the proposition.  I could see it was a “leap of faith”. But I could also see in his eyes that he could see I meant business. What we were doing in tech terms was transacting with Trevor’s personal data store. In fact we were doing it via blockchain in my mind. Ethereum to be exact. And once that proposition was cast on a bare canvas in the game I could navigate the social network by seeing the rather helpful NHS lady (thanks to Tris who was orchestrating it from an early stage put me in touch with Julika – Accenture Health in real life!) and so on.  In real life this facilitation comes from having a real network ENABLED by a linked data ecosystem which lets Trevor publishes his interests to those with services / opportunities best able to match his needs.  With one last tech enablement, narrative capture, we can get the real Trevor. The Trevor made of stories not data points of skills, experience and clinical triangulations. Trevor’s datastore is complete.  And the proposition was working for Trevor. It could work for millions.

We had developed a solution involving narrative capture, Linked Data and a secure and confidential needs store based on a Blockchain technology called Ethereum. BINGO! The personal data store. The architecture for ending unemployment through projecting work through the eyes of individuals. To enabling integrated health through a very personal view of “integrated care” (i.e. it’s how I define it not my clinicians!).

Time for lunch and Pizza! I think I played my role convincingly enough.  Several people with local issues came up to me throughout the day asking for local DWP support at which point I had to point out that I didn’t actually work for the DWP!!  But it felt like I was during the day. In the afternoon we dissected and aggregated the various exceptional “solutions” that our ecosystem had developed.

The above is just one solution to one set of problems.  Each of the 5 archetypes has 3-5 solutions adopted by their actors. They were all brilliant in their own way and I’m looking forward to write ups of the others.

Thanks must go to New Philanthropy Capital (NPC), Centre For Ageing Better and especially Ethos Partner Tim Kitchin for bringing me to Tris. Tris Lumley for bringing me to Paddy and everyone who played so full on during the day.  It was an honour to be part of it 😉