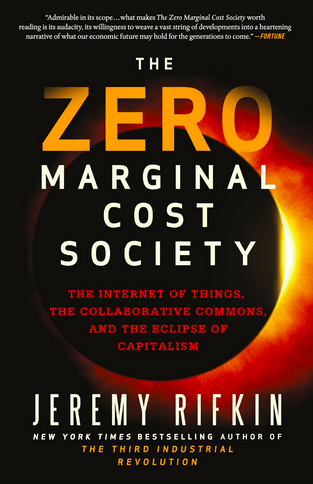 After reading Jeremy Rifkins book “The Zero Marginal Cost Society” (read the summary free on Google Books) I had to start reading it *again*.

I’m not a compulsive reader, in fact I think I have slight dyslexia so I mark myself as a slow reader. I declared that the book was the most important I’ve read in 15 years. And told the Author so as well. And i’m hoping his chief of staff will visit here soon to discuss.

There are a gazillion books on the “paradigm shift” being caused by the Internet. Separately, the demise of capitalism. Yet again the uber-hype related to the “internet of things”. Energy, oh yes “peak oil” and the pluses and minuses of renewable energy generation. Logistics? Globalisation? Vertical integration? The industrial revolution(s). Sustainability. Civil Society and NGO’s. Smart Cities. The environment. Rifkin links all this into a seamless flow.

The book is not perfect but it was (IMHO) one of the most breathtaking in scope and compelling in forward looking vision. Whole systems thinking. It gives a compelling narrative to past, present and future and that is really what we need more than anything else.

What really was the icing on the cake was the view that collaboration, trust, moderation and horizontal integration were emerging as the problem solving approaches that would gather speed. Not to eliminate capitalism but to exist side-by-side, with ever increasing increasing importance.

One of the terms that we’ve used so often in Ethos is Collaborative commons.

I remember sitting in a Board room with General Kirkland and debating a governance issue for Team Army. The scheme involves 40 Army sports charities, the Army sports boards, Ethos VO, the charity (Team Army) and a large number of commercial sponsors. We were talking about the money necessary to “feed” all the charities and the other expenses and costs that would be necessary for various suppliers and we talked about this resource as a “commons”. How would we approach the problems as if it were a patch of grass?

We can’t over-graze. We have to protect the well-being of the land. It was the only way we could produce a sustainable solution. Through this lens. Had we allowed anyone to have a self-interest-only approach it would not have worked.

Startups are similar. Before they become “sustainable” (and that’s worth arguing about in the context of “externalities”, venture capital cash injections and separation of ownership from management and workers) startups consume more than they create.

Increasingly it is social capital that is the lifeblood of such ventures. Not financial capital. That will start to matter less. And that reminds me of something I read list night. It is worth scanning the attached PDF from the Governor of the Bank Of England as he talks about this.

The following is a quote from Mark Carney, Governor of the Bank of England speech at the Conference on Inclusive Capitalism, London 27 May 2014

“unchecked market fundamentalism can devour the social capital essential for the long-term dynamism of capitalism itself. To counteract this tendency, individuals and their firms must have a sense of their responsibilities for the broader system. All ideologies are prone to extremes. Capitalism loses its sense of moderation when the belief in the power of the market enters the realm of faith. In the decades prior to the crisis, such radicalism came to dominate economic ideas and became a pattern of social behaviour. As Michael Sandel argued, we moved from a market economy to a market society.”

All this reminds me that in the 60’s (and before and ever since) there have been communes. Different ideologies.I don’t think we are thinking of the same thing (quite here). It’s not about isolation. Not about vertical integration. it’s about horizontal coordination on a global scale, caring about local things and treating the whole (the planet and humanity) like a commons we should all cherish and look after.

Would you agree? What are your thoughts and comments?