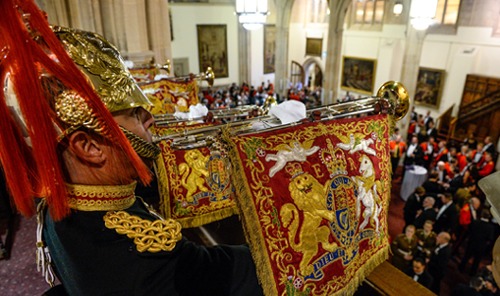 Hosted by the Chief of the General Staff General Sir Nicholas Carter, and presented by Team Army, this year’s awards ceremony, held at London’s Guildhall on Wednesday November 27th, celebrated the success of the Army’s remarkable athletes across a wide range of sporting disciplines, including adaptive sport. Sporting celebrities including Lizzy Yarnold, Matt Dawson, and Garth Crooks turned out to present the awards, which recognise the achievements of those soldiers and officers who have risen to the top in their sporting field; many also hold their own on the world sporting stage.
Representatives of every sport played in the Army were present, as well as members of sports governing bodies, sponsors and supporters. The evening kicked off in style with a moving performance from renowned sporting soprano Laura Wright who sang ‘Invincible’ and ‘The World in Union’. One of our Team Army Trustees, Brigadier Richard Dennis OBE, was a fantastic Master of Ceremonies and had the audience laughing and relaxed from the offset and the awards were very ably, and engagingly, compèred by Sky Sports presenter Hayley McQueen.
‘As we recognise these remarkable athletes tonight, let us also celebrate Army sport. Great sport empowers people. Great sport gives individuals an opportunity to achieve things they never thought possible, and great sport fosters great leaders.’
General Sir Nicholas Carter KCB CBE DSO ADC Gen Chief of the General Staff
Visit the Team Army website for a full list of winners and sponsors, & photos of the event.
Forces TV filmed the event. Click here to see their news item, and here to watch full coverage of the evening.