One way to Resolve Team Conflict 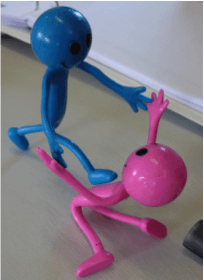 “Conflict can and should be handled constructively; when it is, relationships benefit.”
In, “Who’s Pulling Your Strings?” by Harriet B. Braiker

Do you have interpersonal tension on your team? Here is a Solution Focused approach to resolving it.

Recently, a company asked me to run a workshop for them. During a fact-finding call to establish the client’s situation and required meeting outcomes, I learned that two senior people involved in the workshop were not working well together. People had noticed tension between them in other meetings.

As the client’s outcome for the pending meeting was to build an effective working relationship between three teams, it was vital that the two leaders work effectively together during the meeting.

I suggested that I hold a pre meeting with the two leaders and the client arranged this. The following is an outline of the intervention that you can follow.

To establish a relationship with them, and to save time during the pre-meeting, I telephoned each leader to establish their view of the situation in terms of what they wanted.

I asked them three questions:

You can adapt these, but note that I did not ask, “What are the issues?” or “Why is there conflict?” These would focus them on the problem and achieve little.

Before the meeting I wrote notes of their individual responses, and asked them to verify their own answers. I also wrote each answer on Post – it Notes (use a different colour for each question to give clarity), to enable me to analyse them.

My analysis revealed common themes and I mapped them visually to show the interconnections, (e.g. “Understand what we’re trying to achieve” and “Clearly understand roles”.)

On the day of the meeting, I displayed three flip charts with the mapped responses. When they arrived I had each of them talk about a positive topic for one minute to move their minds off work and to relax them.

Next, they reviewed their mapped responses, noting and discussing the common themes.

After this, they co-created a picture of the future, drawing what they would be doing when working really well together.

This produced a really constructive conversation, if not a terribly good picture! In such a situation it is useful to focus people on a third point (the picture), as well as each other.

From the picture, they identified five critical factors, e.g. “More conversations, fewer emails”, and wrote these on Post-it Notes.

They placed these five notes on a chart and I drew a scale from 1-10 for each factor, where 10 is the ideal for that critical factor.

I asked each of them to mark on the scale where they stand at present.

Importantly, they rated nothing below 3; this demonstrated something was already working in their relationship, as you would expect. Next, for each factor I asked “What is happening that moves you up to this point on the scale?”,to focus them on strengths. This produced some very constructive responses.

As a secondary part of this exercise, I also asked them to:

These secondary questions are helpful ways to build the relationship further.

They produced five actions to take before the teams met and left in good spirits.
So
What can we learn from this intervention?

To Close
At the subsequent team meeting, the two leaders worked very well together and the conversations were wholly constructive. Despite some difficulties with a lack of time, we achieved significant outcomes. Feedback afterwards suggested that other people had noticed this improvement.

For the sake of a two-hour investment of time, we created a much better working relationship that could have a large and positive impact on the project.